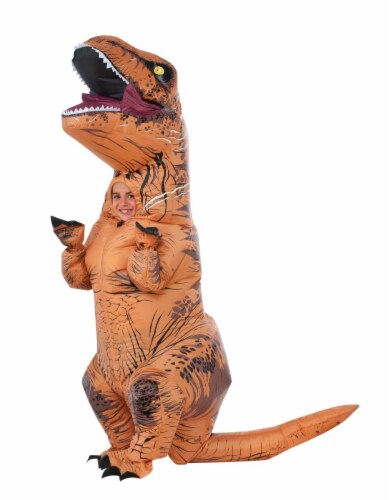 Stomp your way back to the Cretaceous Period with Deluxe Inflatable T-Rex Child Costume. This outfit set recreates the classic likeness of this feared predator. Featured in the new 2015 feature film, this creature is the same dinosaur that scared viewers in the original the dinosaur age. This creature is famous for eating goats, breaking out of its cages and chasing jeeps. This creature is a carnivore and is known to be the king of all dinosaurs. That's if the Indominus Rex doesn't steal the title! Now you can become this feared dinosaur with this deluxe inflatable costume set. This outfit features this giant reptile's battle damaged exterior, an attached battery operated fan, attached shoe covers and wearable 2 fingered gloves. Dinosaur fanatics will feel large and in charge when they don this realistic outfit.